Album: Ghost Towns
Artist: John Statz
Release Date: August 12, 2010
Genre/Region: American folk, folk rock
While the classic "is folk music world music" debate is still argued among some, Nomad's Playlist will state its position by reviewing a folk artist from Wisconsin, USA for it's first album review. In all honesty, I have never been much of an American folk fan. Dylan and his signature irksome voice put me off the entire genre. However, I may be a convert after discovering this up and coming Madison, WI artist.

To say this might sound contradictory as John Statz is a huge Dylan fan and is certainly influenced by him. The Dylan influence was more evident in his solo, live recorded album, An Evening with John Statz (2008). This was the album that introduced me to him and it perfectly captures the intimate setting that make a good John Statz show. That said, Ghost Towns marks a more mature sound with Statz settling into his own style. While his voice has lost some of its typical folk twang, I find myself missing the elegant acoustic guitar lines that made me fall in love with his 2008 album.

In place of the acoustic, Statz has updated the folk sound with a full band and rock/alt-country influences. The album is the result of his tours in the States, Europe and Canada. "Whether it was bullet holes and bombed rooftops in Sarajevo, or desolate abandoned buildings and decaying main street America, the album title seemed very pertinent to the state of the world today" (quoted from his website). However, this is not a heavy album through and through. Even the track "Ghost Towns," which has the type of social commentary message you would expect from a folk song, is upbeat and rocking. A few of the songs do have the heavy soul and acoustic atmosphere of typical folk, such as  "Night Train To Sarajevo" and "Julija."

The track "Best Girl" is a fun, revamped version of "Best Girl of '16" from his 2008 album. Again, I personally fell in love with his exquisite acoustic guitar lines of the earlier album, but that does not stop this new version from having its own merits. "Best Girl" is more upbeat than its earlier counterpart and is a better setting for the lyrics detailing a solider coming home to his best girl.

The best song of the album is "The Wichita Waltz." The track is slow and about a love story gone sour. It is a little more country than I would normally like, but the absolutely beautiful harmonies sung by Whitney Mann send chills down my spine.

Overall, this is a well put together album with a wide variety of tracks to keep the listener interested. Statz has really grown into a distinct sound since his last release and I expect he will continue to produce some great music as he keeps touring and taking inspiration from his travels. The album will be released on CD and vinyl as well as mp3 download on August 12th, 2010. To preview a few singles from the upcoming album, be sure to visit http://johnstatz.bandcamp.com. 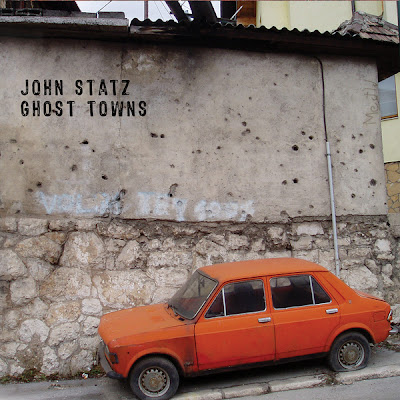 (Reviewed by Alexandra)
Posted by Nomad's Playlist at 10:09

Promote Your Page Too